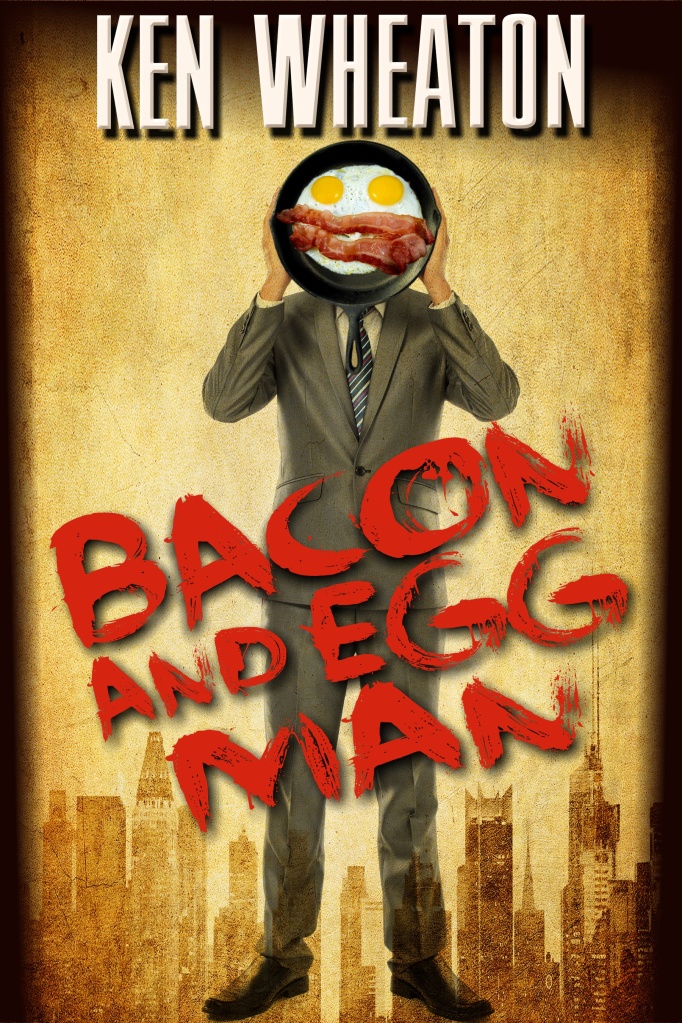 My second novel, Bacon and Egg Man, published by Premier Digital Publishing, is on sale now. At this moment, the easiest way to get your hands on one is via e-reader at Amazon and Barnes and Noble or even for your fancy iPad or what have you. If you want an old-fashioned paper book, order at B&N.com or Amazon.

Interested in interviews, reviews or optioning the rights for six or seven figures? Give me a holler at ken.wheaton@gmail.com. I’ll put you in touch with the appropriate agent or authorities.

Peer into the future. Not our future (hopefully), but a future in which Michael Bloomberg’s most feverish dreams about saving us from ourselves have come true. That’s the premise of Bacon and Egg Man by Ken Wheaton, a novel that should be satirical, but really is just an extrapolation down the path set by smoking bans and soda restrictions. — “Isn’t It Time You Read a Fun, Nanny State-Mocking Book?” by J.D. Tucille, managing editor of Reason 24/7 and author of High Desert Barbecue.

Where Mr. Wheaton is a genius, and why he’s endeared himself to me to borderline fanaticism, is the sheer humanness of his characters (yes, even in an satirical dystopian setting in an implausible future). They are friendly, they are relatable, they are HUMAN. And by nature of that, they suck you right into their world, making you genuinely feel their triumphs and disappointments, causing you to burst out laughing inappropriately on the subway or shriek in delight. —Allison Robicelli, cupcake master of Brooklyn, author of the upcoming Robicelli’s: A Love Story, with Cupcakes: With 50 Decidedly Grown-Up Recipes.

It’s a rollicking, very funny, slightly insane and possibly scary-accurate satire about a near-future in which the U.S. splits into two countries — with the new Northeast nation, founded by King Mike, being an uptight land of politically-correct food culture and draconian restrictions on dangerous substances like, well, bacon and eggs. —Media Columnist Simon Dumenco

Bacon and Egg Man is a hilarious adventure through a not-too-distant future, where food smuggling meets romance in the gentle–but healthy!–dystopia of a Nanny State. This prophetic satire is a page-turner you will want to read twice! —Darren Campo, author of Alex Detail’s Revolution and Alex Detail’s Rebellion, head of programming for TruTV and professor of entertainment and technology at New York University.