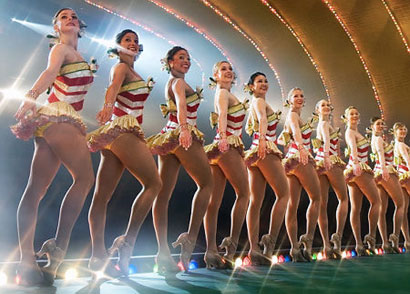 So, after 13 years of living in New York City (NEW YORK CITY!!), last night marked my first visit to the Radio City Christmas Spectacular. And boy was it spectacular!

But first a few words about assholes, because there are entirely too many at this show. Late people? You’re assholes. Look, I understand that you’re selfishness makes you believe that the entire world runs on your schedule, but it does not. Want to be five minutes late to a work meeting? Fine, we’ll start without you. Want to be ten minutes late for a dinner reservation? Okay, then. But I won’t be meeting you in public for food every again (Kenny gets hangry). But there’s not much I can do when you enter a show fifteen minutes late and make the entire row in front of us stand up — because late assholes ALWAYS have middle seats.

I understand the Christmas Spectacular is a family-friendly event, and a noisy one to boot, so Radio City likely doesn’t want to pull the Broadway maneuver of locking those damn doors tight once the show starts — and tough titties if you’re late. But it should. It’s a courtesy to the performer and to the other viewers. And, precisely because there are kids involved — kids obviously being raised by animals — Radio City should take this opportunity to educate the poor little dears on what happens when you’re late. Because left to their parents they’re going to become the sort of person who says things like, “Oh, it’s fine. There are twenty minutes worth of trailers” or “Oh, it’s okay. Everything starts five minutes late.” NO. IT IS NOT OK. Firstly, you don’t know how many trailers will run. Secondly, some of us would rather see the trailers than your fat fucking head spilling popcorn everywhere as you angle for the, yes, middle seat. Thirdly, lots of things start on time. Know what starts at 8 on the dot? Because they run at least three shows a day and are on a tight schedule? THE RADIO DAMN CITY CHRISTMAS DAMN SPECTACULAR!

So of course I was more than thrilled when a group of late 20-something Bridge-and-Tunnelers wandered out of a Jersey Shore marathon and plopped their asses in front of us five minutes after the show started. Two couples, both of the bros obviously thrilled to be there. One alternated between sulking and sleeping, which was made all the better by his girlfriend poking him with a stick. (I’m not making this up.) The other one played with his phone for the first fifteen minutes.

And we had a couple behind us who thought the show was really, really, REALLY spectacular and felt the need to comment on everything. According to the woman sitting behind me, walking a live camel across a stage is right up there with putting a man on the moon.

But I guess using real camels and sheep on the stage was kinda cool, though I was disappointed none of ’em spit or pooped.

And I was really, really disappointed that at the very end of the manger scene, Joseph didn’t lift up Baby Jesus and start wailing that song from The Lion King. Because THAT would have been spectacular.

By the way, you people in the anti War on Christmas brigades will be glad to know that the Christmas spectacular, while heavy on Santa, is alllll about Christmas, and ends with a super-duper dose of Jesus at the end — though, for some weird reason, during the “Nutcracker” portion of the show, the Nutcracker wasn’t in it. END THE WAR ON NUTCRACKERS!

Seriously, though, the Spectacular was a good time. A little hokey and the place was lousy with tourists — some of ’em from Alabama at that — but there are worse ways to spend an evening than watching 40 women with glorious gams dance across the stage.

P.S.: SWEET MEATS
In other news, Cara and I went to the Members Only Dining Room at the Metropolitan Museum of Art on Saturday night. We felt very fancy! We even got a window seat, through which we could stare out into the darkness of Central Park and ask ourselves such eternal questions as “Is that person running alone in the park at night?” and “Do cyclists look like complete spandex-wearing tools in the dark?” (Answers: Yes.)

The Dining Room was offering a Tuscan Tasting Menu. Four courses, one of which was sweet breads — which are not, it turns out, slices of Wonder Bread rolled up around sugar cubes. No, sweet breads is organ meat. Which organs? It all depends. We just assumed we were handed a plate of pancreas and thymus and went to town like a couple of zombies. They were pretty tasty, to be honest. The entire meal was delicious, though the waiter needed a good slap.

He–or someone–forgot about us for one of the courses. Not a huge deal. This happens to Cara and me for some reason. Perhaps we look like we’re having such a good time, they don’t want to disturb us. And usually, when they realize, we get a few free drinks or a dessert or something — because we don’t yell, because we treat our servers with respect, because we understand that things get busy and crazy and shit happens. But this guy? Well, the restaurant wasn’t that busy. But the real sin was this: Because we’d had a wine pairing with this meal and had sat there with no food, we finished that glass of wine meant to go with that course. So when the course finally came out, our wine glasses were empty. And they stayed that way until I had to motion him over and ask for a refill.

It’s probably because he was European. Ugh. The worst. Give me an over-eager but well-trained American waiter who’s a) deathly afraid that such a screw-up will lead to an immediate 15% reduction in the tip and b) has a healthy “This booze ain’t coming out of my paycheck” attitude.

But that was a tiny thing. Really. Complaining about things is just a lot easier. And funnier. Better that than writing 2,000 words of food review — the steak had a frisson of fancy that made guests giddy with delight — that make me look like a douche and make everyone else want to vomit.

3 thoughts on “Radio City Music Hall Is Full of Jerks”