Short Version: If you’re a New Yorker or otherwise not from or familiar with South Louisiana food, go. You’ll like it. If you are from South Louisiana, you’ve been warned. 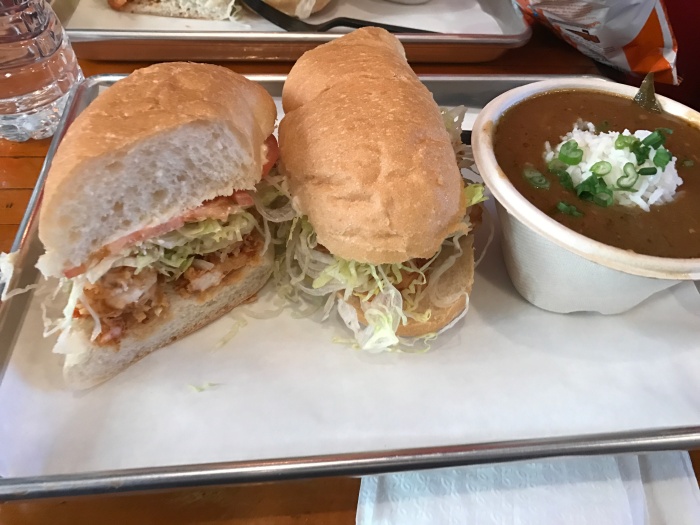 I’d recently received a number of suggestions from New Yorkers to go check out a new place in Brooklyn called Gumbo Bros., a small shop that serves gumbo and poboys.

To my knowledge, New York has never had a legitimate Cajun restaurant. It’s 2017 and that hasn’t changed. The closest thing to legit Cajun offerings at the moment are some of the menu items at a barbecue joint. That’s because Blue Smoke Executive Chef Jean-Paul Bourgeois is from Thibodaux, Louisiana. Now until Mardi Gras, he’s offering a special Cajun menu.

The lack of Cajun food in New York is annoying. But that’s okay. I know how to cook. What gets frustrating is this weird combination of a) the total ignorance of what Cajun food actually is with b) the assumption by many New Yorkers that they actually know what it is. This coming from people who think New Orleans is Cajun and the capital of Louisiana.

I’m not going to flog that particular horse at the moment. I’ve done it enough.

But a couple of things.

First: Ordering gumbo in New York is just plain silly. You never know what you’re going to get, but you can almost always bet it’s not going to be actual gumbo. It won’t be made with roux or there will be at least one wrong vegetable in there, whether it be corn or lima beans or tomatoes. This sort of nonsense helped radicalize me into a writer.

Second: A poboy isn’t necessarily a Cajun thing. It’s a Louisiana thing, born in New Orleans. But that’s still South Louisiana (which is important) and Cajuns love them.

I’ve written before about the sorry quest for a decent poboy in this city. The shrimp poboy, in particular, is the Holy Grail. But due to many factors, almost all of them have been fails. The wrong bread. Not enough shrimp. Soggy batter. Shrimp are expensive in New York. They’re not expensive in Louisiana. This becomes a huge problem for restaurants in New York trying to recreate a Louisiana experience.

The almost good news is that Gumbo Bros. almost delivers. If you’re a New Yorker who doesn’t know any better — or even if you’re one of those New Yorkers who thinks you know better — Gumbo Bros. poboys and gumbo are close enough to the real thing to give you an idea of what these things are supposed to be.

The Cajun potato salad? A perfectly fine potato salad with a little bit of kick. But there’s nothing Cajun about it. In Cajun country, potato salad typically consists of potatoes, eggs, mayo, mustard (and other optional vegetables). It’s often close to yellow in color and many times the potatoes are pretty much mashed. This wasn’t that. But, this was a bit of menu marketing, so no harm, no foul.

The gumbo? It certainly was pretty to look at. Dark and on the thick side, it didn’t have tomatoes or any other crazy things in it. The sausage was good. Overall, it tasted like something you might find in the French Quarter. I’ve actually had worse in the French Quarter. Also, I ate it despite the presence of trace amounts of okra. I have strong anti-okra feelings.

The poboy? We tried really hard to keep our expectations low. When it was served, the expectations shot up. It was the right size and seemed to have enough shrimp. The shrimp were of decent size and covered with golden batter. And the bread, which is shipped every day from New Orleans, was spot on.

But. You probably knew that was coming. The batter for the shrimp wasn’t seasoned enough — or at all. Contrary to the belief held by many outside of the state, Louisiana food shouldn’t take the roof of your mouth off. When I say seasoning, I mean the addition of something as simple as salt would have improved the batter.

More important, the shrimp seemed to have been cooked twice. They looked and tasted like frozen (cooked) cocktail shrimp that had been battered and fried. This resulted in a dry, overly chewy shrimp.

If it sounds like I’m nitpicking, I am. This is what happens when you’re a subject-matter expert. (Or think you are, at any rate.) The older I get, the more I want to give people a chance. I try not to point out every mistake The New York Times makes when it writes about Louisiana — I’ll save all my ire for their use of crayfish instead of crawfish. And I don’t want to be indirectly responsible for screwing up a business that at least tries to get it right. But a) people have been asking what I thought and b) other folks from South Louisiana that I know might like a heads up.

If you’re from New York, the place is worth a visit. If you’re from anywhere outside of South Louisiana, you might like it. Hell, I don’t know what they consider gumbo in North Louisiana and Alabama — where the founders are from — so if you’re from there, give it a shot, too. It might actually taste like home.

But if you’re from South Louisiana (or have eaten at my house), the gumbo is likely going to leave you wanting. The shrimp poboy might frustrate you. If you absolutely have to have a poboy and don’t have a trip home scheduled any time soon, give it a shot. But if you have a hard-core craving for something fried and crispy that will remind you of home, there’s a Popeyes a block away.

By the way, you can find a gumbo recipe in the back of my first novel, The First Annual Grand Prairie Rabbit Festival. Or you can get the recipe for free here. I know there will be something there for Louisiana people to argue with. Check out my other novels while you’re at it.