No. That’s not right. I imagine ice is the first word, with volcano and Bjork tied for second.

Our second day in Iceland started with toast. I don’t eat toast much at home anymore. I’m either trying to do away with carbs or swinging wildly in the other direction and wrapping a buttery croissant around bacon, eggs and cheese.  (Check out Day 1 here. Day 3. Day 4.)

But in Iceland, we started our mornings with toast. IcelandAir Marina Reykjavik’s Slippbarinn does offer up a full breakfast and a breakfast buffet, but we didn’t pay the room rate that included breakfast and didn’t quite feel like shelling out $20-plus a person for eggs and the like. Besides, the hotel’s cafe, at the other end of the common area from Slippbarinn, had a view of the pickup location for excursions.

I’d forgotten how good toast could be, especially when made with good bread. (Boy, does that sound like something a wanky food-writer would type before going all-in on a 2,000 word piece about artisanal toast.) So toast with butter or cheese or avocado it was (pesto was also an option). We had yogurt, too. Iceland does yogurt right. In fact, you might as well start eating Icelandic yogurt now, because it’ll be the thing to dethrone Greek yogurt once Americans get bored with that.

So after loading up on toast and layering on the clothes, we climbed into an Extreme Iceland minibus for the Sensational Iceland tour. Of the tours we had scheduled, this was the one I looked forward to the most because it included a glacier hike. 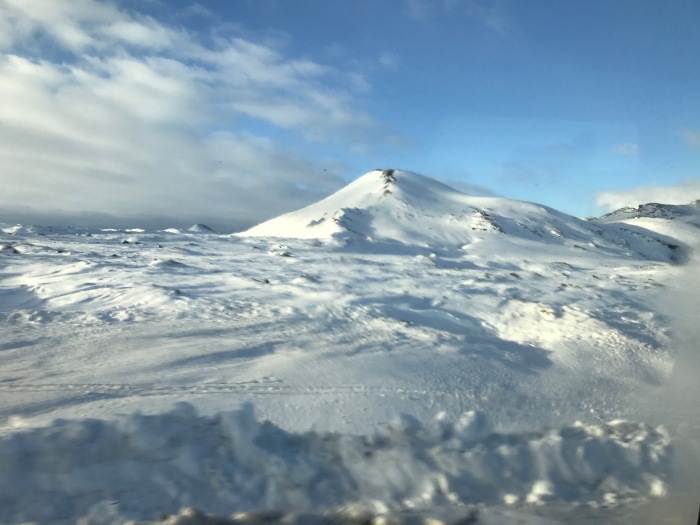 Before we’d get to any hiking, we had some driving to do. And it was during the drive that I discovered a new-found appreciation for my mirrored sun glasses. I’m not a huge fan of sun glasses. I like seeing the world as it is, not dimmed or color-corrected. But I was happy to have them. It wasn’t that the sun was too bright. It was that we’d been up until 2 in the morning looking at Northern Lights. And I was tired. And we were wrapped in all those warm layers and the bus rocked back and forth just so. And baby needed a nap.

But it was a small group and I didn’t want to seem rude if the guide was doing a bit of patter or dropping some local knowledge on us. So for the few minutes I would nod off, I was happy to have the glasses, though they didn’t do anything to hide my slack-jawed drooling when I really fell out.  Sun glass bonus? They allowed me to take selfies without looking like a cross-eyed, squinty inbred.

As it was, I didn’t sleep much. New country. New sights. A brilliant blue sky capped a white and gray pallette stretching toward the horizon in all directions, interrupted by farm houses and Icelandic horses and the occasional steam plume of a geothermal plant, out of which pipelines of hot water snaked. 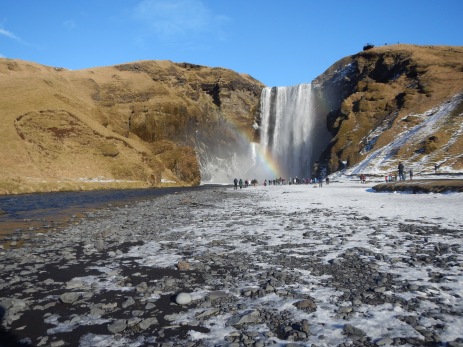 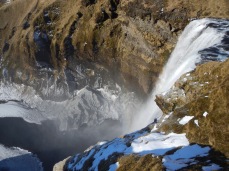 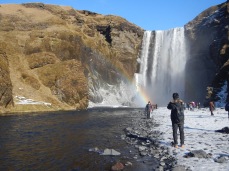 Soon enough, we were at our first stop: Skogafoss Waterfall. The falls are about 196 feet high and 82 across. On a sunny day, you’ll get rainbows in the mist. Want to climb to the top? You’re in luck. There are steps: 527 or so steps, wobbly in places, icy in others. The view, obviously is worth it.

Next up was the main event: the glacier hike. When booking the excursion, it didn’t occur to me to be nervous about it. After all, Extreme Iceland’s site said: “The glacier hike should be suitable for all over the age of ten that are comfortable walking on uneven surfaces.”

Could a 10-year-old handle it? Depends. If he’s an American 10-year-old who spends 90% of his time in a seated position playing video games and slurping sodas, probably not. If he’s a super hyper kid who has trouble with staying in line, definitely not. Other than that, maybe. 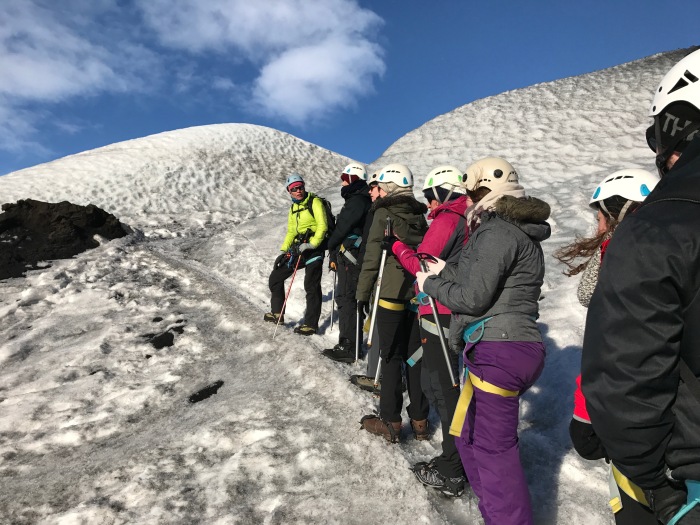 And after a day and a half of watching other people bust their asses on iced-over surfaces and having some close calls ourselves at the previous stop, both Cara and I were a little skittish about ice hiking. Crampons, however, went a long way to putting my mind at ease. What didn’t put my mind at ease were the safety harness and the helmet and the trivia about experienced mountain guys finding the fast-changing Iceland weather worrisome. This sort of thing doesn’t necessarily freak me out, but I know it gets into Cara’s head and if she’s not having fun, I worry about … well, I worry that she’s going to blame me if she falls. As it is, I’ve been in a different time zone when she’s fallen in the house and still I’m accused of pushing her. It’s all in jest. But still, I worry.

After suiting up, strapping on and getting a brief safety lecture, we headed up. It didn’t look like much of an incline, but it was an incline. On top of that, the wind was blowing at a steady clip — apparently just below the speed at which they’d call off the hike. (They speak metric in Iceland, so the guide pegged it at around 15 meters per second, which translates to 30-plus miles per hour.)

Onward we marched. There are benefits to single-file lines and howling winds. Cara was ahead of me and while I could see, even through the layers of clothing, that her shoulders were tensed up, she couldn’t turn around and shoot eye daggers at me or ask, “What the hell have you gotten us into?”

It’s a fair question. Why go hiking up a glacier? Is it for the challenge? Is it for the natural beauty? Is it to brag about it to people back home, hoping that they haven’t hiked a glacier at any point in their lives and therefore they are inferior to you?

Eventually, we made it to an ice cave. The ice cave was cool, even if it gave off a certain “The Thing” vibe.  It was at this point that the guide started urging us to hurry along and not waste any time. She’d been laid back and encouraging up to this point, so I figured something might be up. When I came out of the cave and looked up the glacier, I noticed the blue sky had been blotted out by a hazy mist. It didn’t look overly threatening, but it didn’t look like a warm fuzzy blanket either.

Then the wind picked up. The gusts grew stronger. A pair of sun glasses went flying by. The crampons proved true, but it was more than a little disconcerting to negotiate a decline, over ice, with wind gusts over 40 miles per hour hitting you in the back. I wasn’t only worried that my wife might slip and crack her head or that I might get blown into an ice hole (say that with a Southern accent for a cheap laugh). I was afraid of being that guy, the one who slips and takes down every single person in front of him.

Thankfully, none of us on the hike turned into a human bowling ball.

After coming off the glacier, while walking the trail back to the parking lot, we heard a rather large cracking sound and turned around just in time to see a bit of it calving off into the lake below. (We didn’t walk anywhere near that section, but it was cool to see a bit of the natural process on display.) And after coming off the trail and into the parking lot, that cloud caught up with us, delivering even stronger winds and a face full of snow.

But another half an hour drive and we were back in sunshine, this time on the coast at the black sand beaches of Reynisfjara. (Why, yes. I can pronounce all these Icelandic place names like a native.) The sun may have been out, but the wind had not diminished. If anything, it was stronger on the coast, particular when it would gust. This led to periodic literal sand blasting of the face and other exposed bits of skin. Just last week, I dug out a piece of black sand from my phone case and there is still quite a bit of it in my coat pockets. 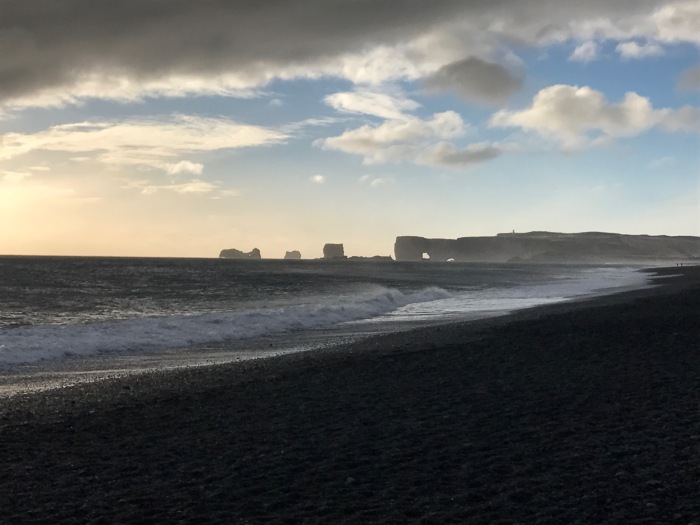 The place, more than any other we’d be too up to that point, was crawling with tourists. While I managed to get photos that make it look like a stark, barren landscape where few humans dare tread, the fact was I’ve seen fewer people at Coney Island during the summer. Still, the basalt columns, the offshore formations, the black sand and the marine equivalent of dust devils impressed upon the human mind that you’re just an insignificant speck. But it’s really hard to get your brooding philosophizing going when people are scrambling all over the rocks like monkeys and sand is blowing in your eyes.

Oh, and we saw a seal. I’m pretty sure Cara and I were the only ones who spotted it, bobbing along in some particularly vicious surf (complete with “sneaker waves”). Back in the rest area building, when I told the guide we’d seen a seal, she said, “Oh, you did” and gave me a look that indicated she thought I was just imagining things.

After departing the black sand beaches, we stopped at one more waterfall: Seljalandsfoss. The unique selling proposition of this one was that visitors could walk behind the fall. I figured that would be worth a cool photo or two.

But alas, such photos will have to wait for a summer trip. I was starting to get wet from the spray before I’d gotten remotely close to it and, again — a complete surprise in Iceland — there was a sheet of ice on the approach. 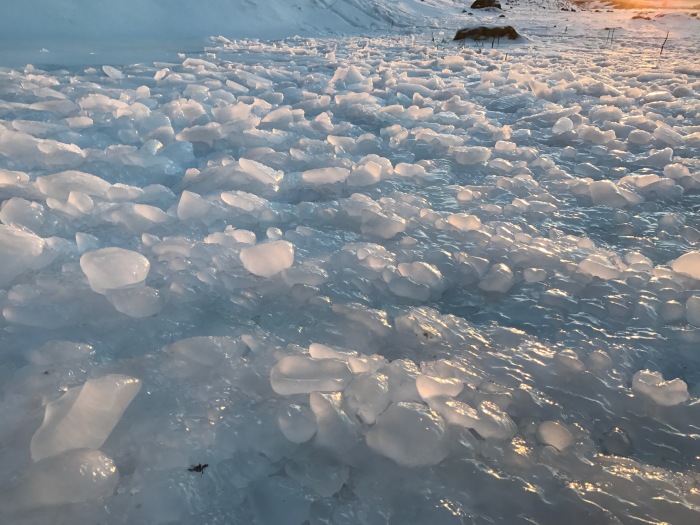 People were going down left and right. I almost bit it twice. Call me unadventurous, but I didn’t feel like asking the guide for crampons AND getting soaked. We actually had ponchos, but it seemed like a lot of work for a photo that, let’s face it, probably was just going to look like badly lit falling water. So we made do with just taking in nature’s beauty from a slight remove.

Then it was back to Reykjavik. Between the drive back and the dropping off of people at their hotels, it was 9:15 by the time we returned, exhausted and hungry. It being Saturday night, the Slippbarinn was packed with beautiful people in trendy clothes. We wanted to shower and change, but it closed at 10 and it was offering some sort of tasting menu from a visiting American chef that held no appeal. Worse, the helpful host at Slippbarinn pointed out that most restaurants closed at 10. Cara was on the verge of just showering and eating Kind Bars and Goldfish before going to sleep, but I talked her into walking across the street to a hamburger joint, which had closed at 9, and then across the other street to Forrettabarinn.

Forrettabarinn also closed at 10. It was also full of beautiful people in trendy clothes — they may have even been locals. And there we were looking like we’d just climbed out of a tourist bus after a day of sight-seeing. But Forrettabarinn had a full menu and a table ready to go. There was horse on the menu, but I couldn’t do it. I also skipped the Cajun burger. We had warm bread and tapenade. I had a lamb dish. I ate a lot of lamb in Iceland. Cara had langoustine soup, a local specialty and a solid choice wherever you end up in Iceland. It was all delicious, well balanced and composed, even if the portions could have been a skooch bigger for the price (granted, we were a little more than famished at that point). Nothing a side order of onion rings couldn’t remedy.