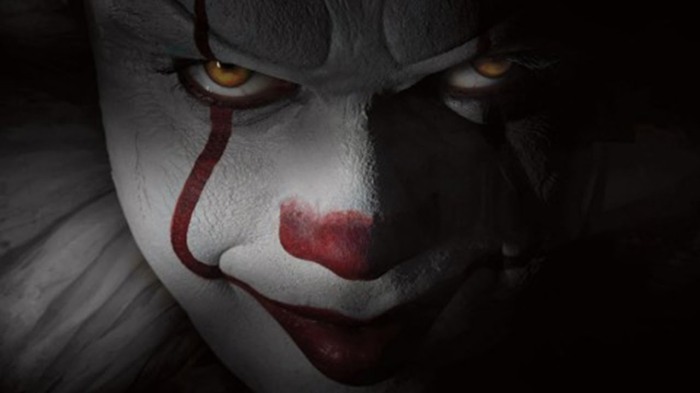 In the 1980s, a rag-tag group of misfits band together for an underground adventure in order to save themselves — and their town! Come for the journey, stay for the laughs — and the scares! You’ll laugh, you’ll scream — you might even cry! I’m going to type a complete sentence — and then set off another related sentence with a dash!

You may have heard of the runaway success of this small indie film, “It.” It’s based off of one of the less-well known works of a relatively obscure short-story author who sometimes dabbled in horror and science fiction. Previous successful movies based on his work– “Stand by Me,” “The Shawshank Redemption,” “Misery,” “The Green Mile” — came mostly from his more literary work.

Okay, okay. I’ll cut the shit. As you may have guessed, Cara and I saw “It” this weekend. I should point out that I’m married to a horror-movie nut. The first time she visited me in New York, she made me watch “The Human Centipede.” In return, I made her watch “Teeth.” That encapsulated the early history of our horror-movie experience. She liked disgusting. I liked weird. I also prefer scares, while she prefers splatter. Lately, we’ve found a happy medium with Korean horror flicks. (But you know what you’ll never see in Korean horror film? A happy medium. Boy are those people miserable.)

Would you like me to start typing about the movie now? Okay, but give me another second or two.

Over the phone this weekend, Mama and I tried to remember if “It” was the first Stephen King book we read. Back then, I’d basically read whatever paperback she’d just finished. I don’t think “It” was the very first, but at the time it was definitely the scariest. It involved a killer clown AND the horrors of the young teen experience. The book also included a heaping helping of Stephen King cosmic evil and a kiddie orgy (which was scary and, you know, kinda hot, which was a perfectly fine thing for me to think at the time because I was a teen so shut up).

I haven’t re-read the book since then. I don’t know if I’d still find it as scary. I imagine it has to hold up a lot better than the 1990 miniseries that’s remembered mostly for Tim Curry’s portrayal of Pennywise and little else. That version was on last week. It was barely watchable the first time around and now it holds up about as well as Harry Anderson’s wardrobe in the movie.

The new version, I’m happy to report, is extremely watchable.

While I agree that it does miss some of what Stephen King is going for, that’s not the worst thing when it comes to the movies based on King’s work. We all know that King hated Stanley Kubrick’s version of “The Shining,” because Kubrick took a couple of the books major themes and mangled them almost beyond recognition. The result, of course, is a classic movie, for decades one of the few excellent films based on King’s scary work. (Yes, I like “Carrie” and “Christine” but I’m not sure those would qualify as excellent films.) Decades later when “The Shining” was remade the way King wanted it done, it was dull as dishwater. King’s novels are page turners, but scripts that hew too close to them are anything but fast paced.

And King’s tendency to cram tales of the weird type of monsters into his work are often hard to convey on film.

Going in, I worried that the giant cosmic turtle and deadlights and interdimensional oddities of the novel might just come off as cheesy in the movie. Which would have been a shame. Because for a movie that features a killer shape-shifting clown, it seems fairly rooted in reality. The writing is crisp and the acting, particularly for a group of kids, is great. Finn Wolfhard steals the show as Richie (played by Seth Green in the original) and Sophia Lillis as Beverly is great (she also bears a strong resemblance to Amy Adams from certain angles).

And they manage to weave a fair amount of humor into proceedings. This was aided by the decision to not include the adult storylines at all in this movie. If there was one surprise here, it’s how Spielbergian the movie felt at times. In fact, it put me in mind of “The Goonies.” But a hell of a lot scarier.

If you really think about it, “Goonies” could easily have been a horror movie. The Fratelli’s are disposing of bodies in an abandoned restaurant where they keep a deformed and obviously mentally and physically abused family member chained up in the basement. There are also high school bullies, lethal booby traps and ghost pirates.*

“It,” of course, isn’t primarily interested in laughs. The jokes are simply tension cutters amid the scares. And there were plenty of them. The one ding I’d make against the movie is that I don’t think it achieved one of those ever-present foreboding senses of terror that’s the hallmark of a great horror movie. Then again — like I’ve said — Cara and I have been watching Korean horror movies, so we may be ruined for life. But “It” does manage to keep the scares coming throughout, particularly good old-fashioned jump scares.

Unfortunately, I was trying not to laugh for about half of them because the guy sitting next to me basically started hyperventilating any time Pennywise showed up on screen. There were moments when he had his feet on the seats, his knees drawn up in front of his head and his baseball capped literally covering his face. A grown-ass man, yall.

But it wasn’t distracting enough to ruin the vibe. And I jumped quite a bit thanks to Bill Skarsgard’s Pennywise. Tim Curry’s performance always struck me as over the top, a bit too wink-wink, nudge-nudge. This Pennywise is just — well, if Creepy Clowns got together and formed a country, Pennywise the Dancing Clown would be King Creepy Clown.

The movie marches right along to the inevitable showdown at the end and it stayed within the realm of the movie world that had been set up over the course of the film rather than remaining faithful to the book. (Mild spoiler alert: There is no pre-teen gang-bang in this movie.) And Andy Muschietti and the gang manage to deliver an ending that works to close the movie while leaving it open for the next chapter.

Which, I imagine we’ll be seeing — along with a raft of new movies and remakes based on King’s work — considering the movie made a katrillion dollars opening weekend.

*Bonus material, thanks to my brother-in-law.