After my first trip to the bathroom last night, I returned to bed and was dozing off to the sight of our dog Lucy snuggled up tight in Cara’s arms. And then I heard this. (Turn your sound up.)

I think it was a fox. There’s an outside chance it could be a mountain lion. They both make wretched sounds at night, the sort of thing that makes your sphincter clinch. Noises that make it easy to see where early horror stories originated. I’ll tell you this, if I was a pioneer back in the day, or Native American before then, and had to listen to this at night without the benefit of being on the second floor of a house with nice sturdy walls, I might have just thrown myself in a river rather than try to sleep through that every night.

And the audio here doesn’t remotely do it justice. Whatever it was was off to the southwest, but it sounded like it was right outside the window — right outside all the windows.

Special bonus track: If you listen really closely, you’ll hear an elk right around the 16-second mark. It was off to the north somewhere.

We’re having our deck ripped out and replaced. The deck is where we kept our hummingbird feeder. We were warned early on not to leave it out overnight because the bears would come for it.

I forgot it out there a few times and nothing ever happened. This might be because that particular corner of the deck put the feeder about 15 feet off the ground. If a bear wanted at it, it would need to come at the deck from the other side and hop the railing. Bears up here do that, but it’s likely none ever caught the scent of the feeder.

This week, Project New Deck started. The old deck has been ripped out. So I moved the hummingbird feeder (and a seed block) to a tree out front. Tuesday night, I remembered to bring it in.

Last night, I was messing around with the grill (also moved out front), going back and forth, saying “I’ll grab the feeder on the next trip.” I never grabbed the feeder.

It almost looks like Mama Bear was holding everyone back behind the construction dumpster and then gave the signal, “Go go go!” Everyone scrambles to the tree. I think the moment when most of them split is when we rushed to the bedroom window and were, “Hey you darned bears, get off my feeder.” (Actually it was more like, “I can’t believe you forgot the feeder. We talked about it. You probably did it on purpose.” In my defense: Not THIS time.)

But if you look closely, you’ll see one of the cubs climb the tree. He skipped the hummingbird feeder and went for the bird seed block. (It’s got berries and some kind of fat in it.)

I went down, turned on the lights, and he eventually climbed down. Then after a while — a long while — I went back out and grabbed the hummingbird feeder and the seed block and was not eaten by a bear. This time.

Woke up this morning to go to the bathroom. Around 4:45. Got back into bed. Just as I was about to drift off, I heard a loud cracking sound, a branch breaking out front.

I’ve watched nine deer walk through the yard so I figured it wasn’t deer. I reached for my phone to see if the Ring camera had picked up anything. No alerts. So I put it on live mode.

You can check out the video above. Gray pre-dawn light. At first glance, nothing. You Ming notice the top of one of the aspen trees rocking back and forth, despite an absence of wind. It’s just to the left of the column. Keep your eye on that spot. There! Did you see it? Something black moving. And a branch falling over.

I hopped out of bed and went to the window. There was definitely something moving. But between the light and the trees I couldn’t quite make it out. Then I noticed movement closer to the road. An elk. About medium build. I looked back to the original spot and it finally stepped out into the drive.

An impressive bull. Full rack. I’m going to guess 600 pounds. And he’d been almost impossible to spot due to aspen trees with trunks maybe three inches around. I wasn’t the only one fooled. The Ring camera still hadn’t gone off by this point despite him being in full view in the driveway. Maybe it’s because they move so slowly.

A third elk came into view, this one closer to the road as well and drifted through the yard without a sound. This one was a male as well, which makes me think even the big one was still on the young side and this was a group of juveniles. (I’m not an elk expert. I might be mistakenly applying mule deer habits to them. But the young mule deer bucks rove around in groups this time of year, like young punks on the prowl. The only thing they’re missing is cigarettes, tattoos, and the deer equivalent of a sneer.)

Finally, as the big guy made to leave, the Ring picked him up. You can’t see him all that well, but when he lifts his head for a moment at the start of the video you can see his antlers.

Today is garbage day. This involves me dragging two heavy cans up the drive. Because I am a manly man I usually drag them both at the same time. But because I am getting old and my body falling apart, this morning I dragged the regular garbage up, came down and grabbed the recycling and dragged that up. Walking back toward the house I was surprised to find a young buck nibbling in the garden.

And by surprised, I mean I almost crapped myself. It took me less than 30 seconds to drag the recycling up and head back down and he’d managed to sneak in there during that time.

(If reading isn’t your thing, you can just skip to the video down at the bottom)

Seeing that he wasn’t afraid of me, I decided to do what anyone would do: stop and observe this wonderful moment of nature.

Just kidding. I whipped out my phone and started recording. And then he started walking. Right toward me. I backed away slowly. He was tiny, but still a buck, and I didn’t know if now was the time he was going to prove himself a man by ramming a human in the junk. I moved toward the garage.

And he followed me.

I stopped. Whatever happened, I didn’t want him inside the garage where he might panic. I made some shoo-ing motions to no avail. So I headed back toward the yard. He watched me. I took a couple more steps and whistled. He followed.

He started eating grass at the edge of the deck and I slowly went back into the garage and hit the door button. I used the side door of the garage to go into the dog run. He walked over and considered the gate as if wanting to be let in. I didn’t let him in. I didn’t pet him, either, though I really wanted to. Eventually, he moved on.

Maybe someone around here has been feeding him. Or his mom — her name is Deerdra — just recently gave him the talk and told him to be on his way. Maybe the poor guy was just feeling lonely.

Either way, I hope he makes it. Here’s some video.

(This post is rated PG-13 for strong, but entirely appropriate, language).

You’re walking down a path running along a rushing mountain river when you hear a grunting up ahead. You pause. Maybe it’s a bear or a hog of some sort. Do they have hogs in the mountains? As you draw closer, you see a man wearing boots up to his chest, a hat jammed onto his head, polarized sunglasses. He’s bent over, in some sort of distress. Maybe the nine foot pole he’s grappling with has pierced his side. There’s a pair of hemostats on the ground, almost in the water. Nail clippers, too. He’s mumbling furiously.

Closer still, you make out what he’s saying. “You piece of shit. Come on you little son of a bitch.” Over and over, weaving in worse as he goes along, sounding like The Old Man from “A Christmas Story” fighting with his furnace — except you don’t need to use your imagination to figure out the words.

You’re looking at me on my first solo fly fishing excursion.

END_OF_DOCUMENT_TOKEN_TO_BE_REPLACED 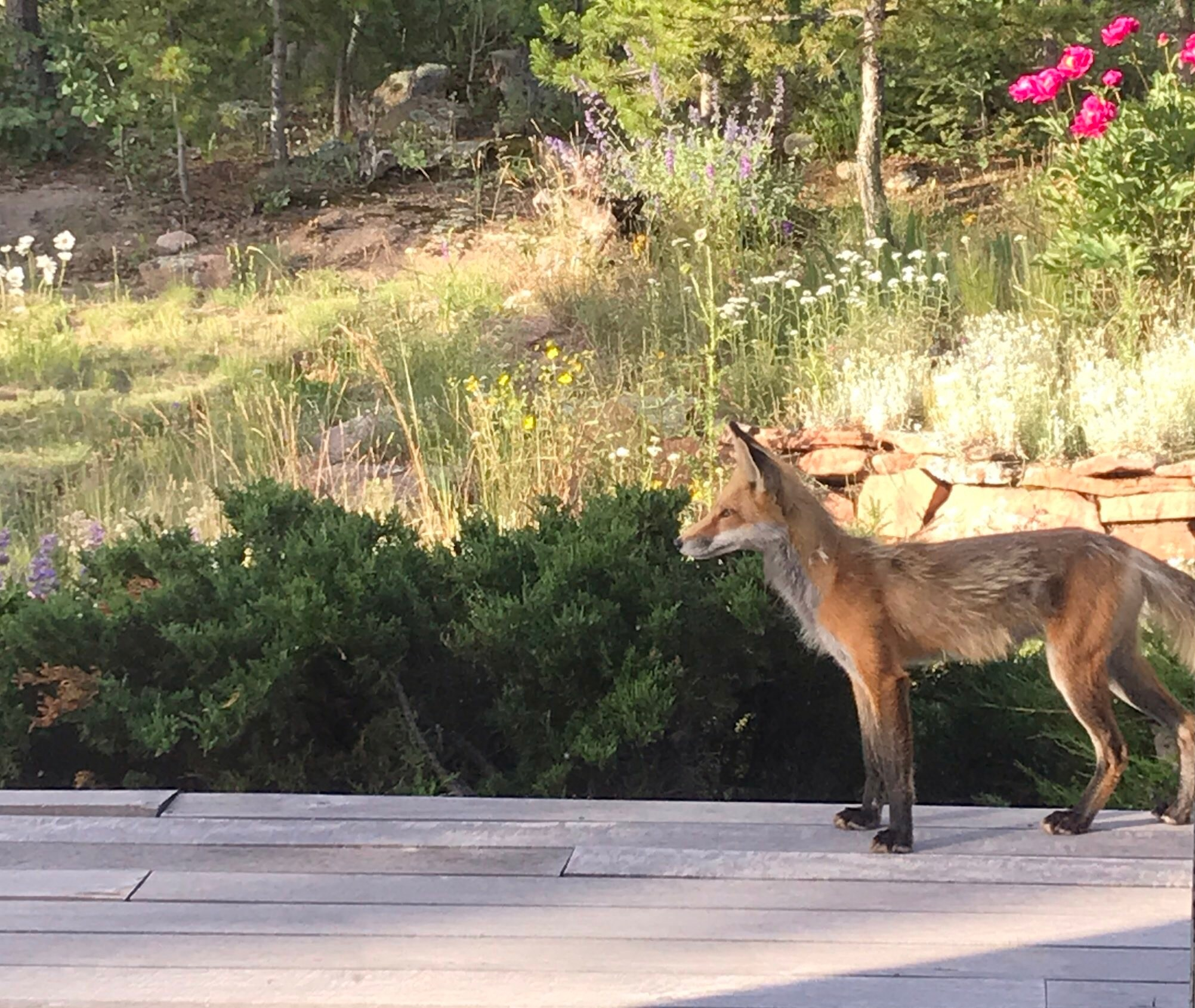 It’s been three months since we’ve moved into our house in Conifer, Colorado. To be honest, it sometimes still feels like we’re squatting in a vacation home. Until I have to write a check for the plumber. Or the surveyor. Or the garbage collection company, which, by the way, still hasn’t given me the bear-proof garbage can I’d requested.

You hear a lot about guarding your garbage against black bears up here. They’re basically the raccoons of Shadow Mountain. In fact, while I have seen one live black bear up here (cutting through our yard on Fourth of July, much to the delight of visiting family. As one said, “That’s a big motherfucking bear.”), I’ve only seen one raccoon — and that poor guy was dead on the side of the road.