You know something has to have gone wrong when the coffee-cart guys aren’t on the streets. But it makes sense. They all live in Queens or Jersey, likely in areas still without power or underwater. Not that any sane person would try to drive into Manhattan today.

But plenty are. Which is sort of ridiculous. There are no traffic lights from the Manhattan Bridge all the way to 39th Street.

I know this because I caught a ride in with Cara and her coworkers. My office has power and we have an old-fashioned print magazine to put out — unlike the website, we can’t do it from home. Cara, on the other hand? I just got an email saying they’re still driving around looking for parking. Not only that, they’re looking for a place to work. Seems the employers are sending them to an building site because their office is still without power. Nothing drives a boss crazy like the thought of you sitting at home collecting some pay for watching Magic Mike for the fifth time.

All the Starbucks are still closed. Walking around Midtown, I saw a frequently repeated scene. Individual would approach a Starbucks then stare in mute horror, unable to comprehend such a thing as a Starbucks closed on a weekday at 8 a.m. Perhaps this person has been to two or three other Starbucks, only to find they’re all shuttered for the day. Of course, there are plenty of coffee options open — most of them better than Starbucks.

It’s an odd thing how self-centered survival can be. We made it through Hurricane Sandy fine. Never lost power or water or internet. Our DirecTV signal — which went out for hours during Irene last year — never wavered. In fact, we got very little rain. This storm never worried me, to be honest. Sure, we prepared. Always pays to take these things seriously. But here’s the deal. We’re on the slope in Park Slope. It would take a Category 5 storm to push water into our neighborhood. And while plenty of trees snapped and fell around the Slope, we’re on the first floor, meaning — from a practical standpoint — there are three other apartments protecting us. Rain? We had a storm last year that dumped 10 inches in 24 hours and we didn’t flood — and oddly enough we got very little rain with Sandy.

So we were extremely lucky. A lot of people weren’t. Entire neighborhoods and towns are gone (for now). People will be without power for days. I’ve got a coworker, who lives in a high rise in Lower Manhattan, who’s got no power. And, what people may forget is that if you’re in a high rise with no power, that also means you have no water. They filled their tub with water for toilet flushing and the like but a tub full of water doesn’t last long. But he’s taking it in stride.

People may think this isn’t supposed to happen. People may think that New York is different. But nature is nature and sea water is sea water. And when sea water meets electrical transformers, it doesn’t matter if they are meant to power the grid for lower Manhattan. If water works its way into a sub-basement electrical supply system, it doesn’t matter if that basement belongs to a hospital.

And just because millions of people have business to do, that doesn’t mean that water will evaporate over night. In the wake of Katrina, a lot of people had held New York as an example of how things were supposed to work. Look how quickly we recovered from 9/11 and the 2003 Blackout. As I said at the time, there’s a huge difference between power outages caused by blackouts or even bombs — and power outages caused by millions of gallons of water.

New York is lucky in that the water came in and, in most cases, went back out — unlike in New Orleans, where water poured into a bowl and sort of sat there. I believe there are towns in Jersey where this has happened due to broken levees — and they’re going to suffer that hellish fate.

Weirdest thing I saw? This angel at the top of St. Augustine’s on the corner of Sixth Ave. and Sterling in Park Slope. 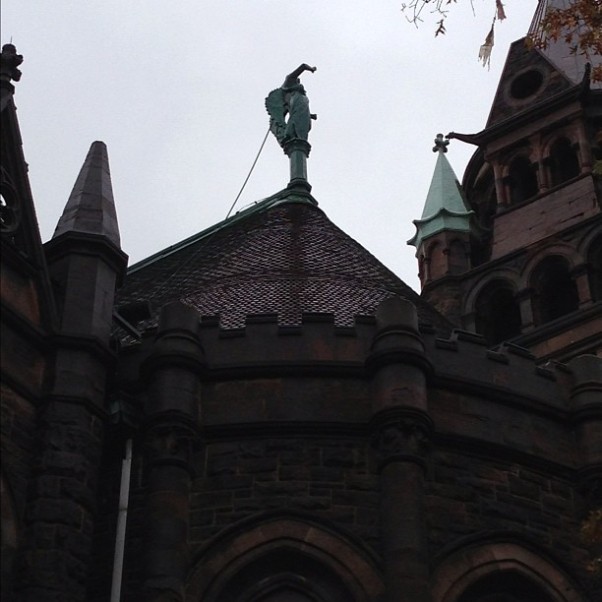 What’s weird about it? It’s missing something.